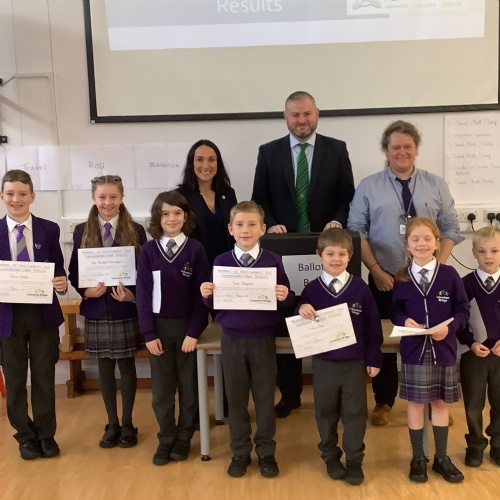 In a bid to encourage pupils to participate in activities which develop their oracy, language and communication skills, Laneshaw Bridge Primary School has launched its very own School Parliament.  The school identified the impact  ‘class bubbles’ has had on limiting opportunities for socialisation and debate; consequently the school  launched this initiative with the intention of  bringing pupils across the school together to debate key  priorities for the school.

Pupils were asked to propose themselves for election. Four candidates from each year group were nominated to stand. Pupils participated in extensive election campaigns which included empowering speeches to their ‘electorate’ and posters detailing their manifestos.

The vote was conducted by secret ballot. Throughout the process the school was able to promote the British Values agenda of Democracy, Rule of Law, Respect and Tolerance.  Once the voting window had closed, pupils were invited to an election assembly attended by Local MP, Andrew Stephenson who announced the winning candidates.

Elected parliamentarians will meet regularly to discuss key priorities for their ‘electorate’ and will also coordinate fundraising activities to make improvements pupils would like to see at the school.

‘This has been a great opportunity to enthuse and bring together all of our pupils.  Those that stood for elections showed great confidence and passion and must be congratulated on their incredible efforts.  I personally look forward to working with our School Parliament.  Finally, I would like to extend my thanks to Andrew Stephenson for inspiring our pupils throughout the process and for announcing the winning parliamentarian for each class – you never know, one day we may see one of our pupils as the next Local MP for Pendle!’.